Warning: "continue" targeting switch is equivalent to "break". Did you mean to use "continue 2"? in /kunden/567486_14057/oos.pdfa.org/wp-content/plugins/types/vendor/toolset/types/embedded/includes/wpml.php on line 650

Warning: "continue" targeting switch is equivalent to "break". Did you mean to use "continue 2"? in /kunden/567486_14057/oos.pdfa.org/wp-content/plugins/types/vendor/toolset/types/embedded/includes/wpml.php on line 667
 4th International PDF/A Conference Proceedings | PDF Association 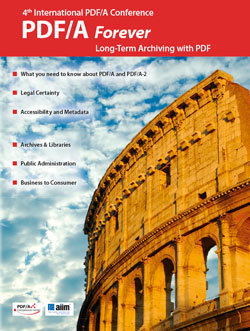 The Portable Document Format  developed by Adobe Systems and first published in 1993  offers a series of beneficial and hitherto unavailable characteristics. In addition to platform independence, this includes reliable rendering of page oriented contents. All components of a file such as fonts, texts, images and graphics are included in the PDF file itself. These advantages made PDF a candidate for standardization for selected usage areas and industries. What all standards have in common is that, as subsets, they restrict the extensive features of PDF and, in this way, optimise it for special application options.

PDF/X and PDF/VT: Standards for the Printing Industry
In the printing industry, it is extremely important that digital print material is reliably reproduced. The technical ISO committee TC 130 developed the PDF/X standard, whose first part was published in 2001 as the first international PDF standard. Since then additional parts have been developed as part of the ISO 15930 series of PDF/X standards. The most recent additions  PDF/X-4 and PDF/X-5  have just been revised as of July 2010. The PDF/VT standard (V for variable data printing and T for transactional printing) adds a purely PDF based option to the widely used high volume printing formats like AFP and PPML. It enriches PDF for the purpose of variable data printing and has been published in August 2010.

PDF/A for Long-Term Archiving
PDF/A-1 was published by the ISO committee ISO TC 171 in autumn 2005 as the international standard ISO 19005-1 for long-term archiving. PDF/A is beneficial above all in the administration, archiving, library and publishing, as well as banking and insurance sectors, but also in manufacturing industries since any digital documents  from invoices, books and manuals to technical drawings  can be permanently stored using this standard. Work on the second standard part, PDF/A-2, was completed from a technical point of view in Paris in summer 2010. It is expected to be published early 2011. Just having PDF/A-2 completed, the PDF/A committee within ISO TC 171 started work on an additional PDF/A standard part, PDF/A-3.

PDF/UA: Standard for Accessible PDF
The accessibility of document content is becoming increasingly important, especially in the field of American and European authorities and administrative districts. The PDF/UA standard (UA stands for Universal Accessibility) is being developed as ISO 14289-1 within ISO TC 171. It aims to ensure that contents of PDF files are properly structured and thus are sufficiently accessible such that assistive technologies like screen readers can extract and present their content accordingly.

PDF/E: The PDF for Technical Documents
ISO standard 24517-1 was published in 2008. This standard supports the reliable and secure exchange of engineering related content.

Last but not Least: PDF 1.7 is an ISO Standard
Since summer 2008, the PDF file format has also been standardized as ISO standard 32000-1. It is based on PDF 1.7. New developments are being incorporated into the second standard part  ISO 32000-2  also known as PDF 2.0, which is currently being developed and scheduled to be finalized in the second half of 2011.

PDF/X in a Nutshell

PDF/UA in a Nutshell