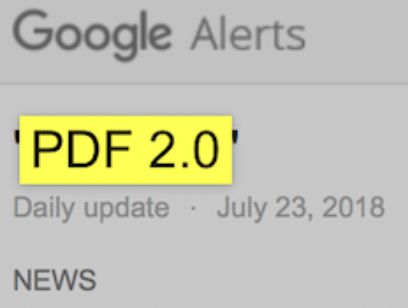 A year after the publication of ISO 32000-2 (PDF 2.0), software utilizing the latest iteration of the PDF specification is beginning to emerge. Firms including Adobe Systems, Global Graphics, callas software, Nitro PDF, PDFlib, PDF Tools, and others have all announced their support for PDF 2.0.

On July 23, 2018 alone, three distinct announcements of PDF 2.0 support from Adobe, Agfa and OneVision appeared in your correspondent's inbox.

Together with previous such announcements, it's clear that the PDF industry is embracing PDF 2.0, and has begun to turn its attention to supporting the various new features, enhancements, tweaks and other changes from the previous 1.7 PDF specification.

"Welcome as these initial announcements are, we know that many other developers are also working hard on many different aspects of PDF 2.0 support," said Duff Johnson, Executive Director of the PDF Association. "Developers are seeing the value in the new ISO specification and are responding accordingly," he said, naming Tagged PDF, Associated Files and digital signatures as areas in which he sees